While I was trawling through all my old publications, I found this piece of fiction – ‘Fears – Size/Quantity – Margins’ – that I suddenly understood is also a part of the #MeToo theme.

The piece interrogates incidents in a young woman’s life that constitute fear-inducing harassment and rape, or the fear of looming harassment and rape. The protagonist is trying to forge a career in the arts, which means socialising with ‘bohemians’ of both sexes. It contains a particularly 1980s scenario, in which a young woman describes unwanted and disturbing sexualised incidents, only to be told by her male friend that she ‘has a persecution complex’ and is simply vain and thinks everybody wants her.  And her equally ‘bohemian’ female friend, a singer, rather than giving solidarity, is rejecting because the whole conversation embarrasses her and she doesn’t want to be considered ‘radical’, ie. critical of male behaviour, or ‘feminist’, ie. a man-hater and possible lesbian.

At the time, I was encouraged by a much older (male) mentor to add this to the end of my self-published poetry collection, ‘Conscious Razing: Combustible Poems’, way back in 1986. It belongs in this collection but, being short fiction rather than poetry, I have given it a file of its own.

Reading it now, I can categorically state that this was how it was, at least for me, being a young twenty-something wannabe artist in the 1980s. The unfairness of it all, the expectation that women should just ‘suck it up’, (ie. if you want to play with the big boys you have to fuck, or put up with demands to fuck, and that’s just the way it is) is an encapsulation of the conditions that turned me into a lifelong feminist.

I recall that I felt embarrassed by this piece for many years, and often rued that I’d taken my mentor’s advice and included it in the book. But now, all these years later, I realise he was right. It is a powerful,uncompromising piece, and reading it in 2018 just gives me the chills.  This is, in actual fact, a record of some of my #MeToo experiences, before it even had a name.

I am glad now that I self-published it. I doubt the literary magazines of the time would have touched it with a barge pole. The feminist and lesbian literary subculture may have, but because it concerned heterosexual scenarios I wasn’t sure it would fit there either. So I never sent it anywhere, just stuck it in the back of a 200 copy limited edition book of poetry. 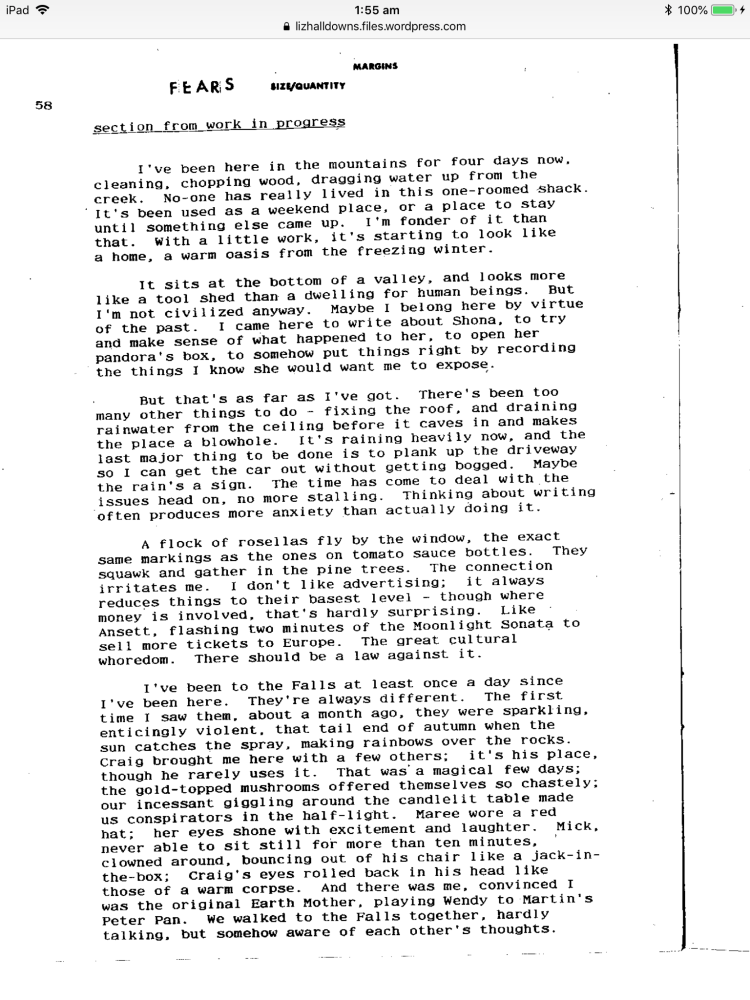 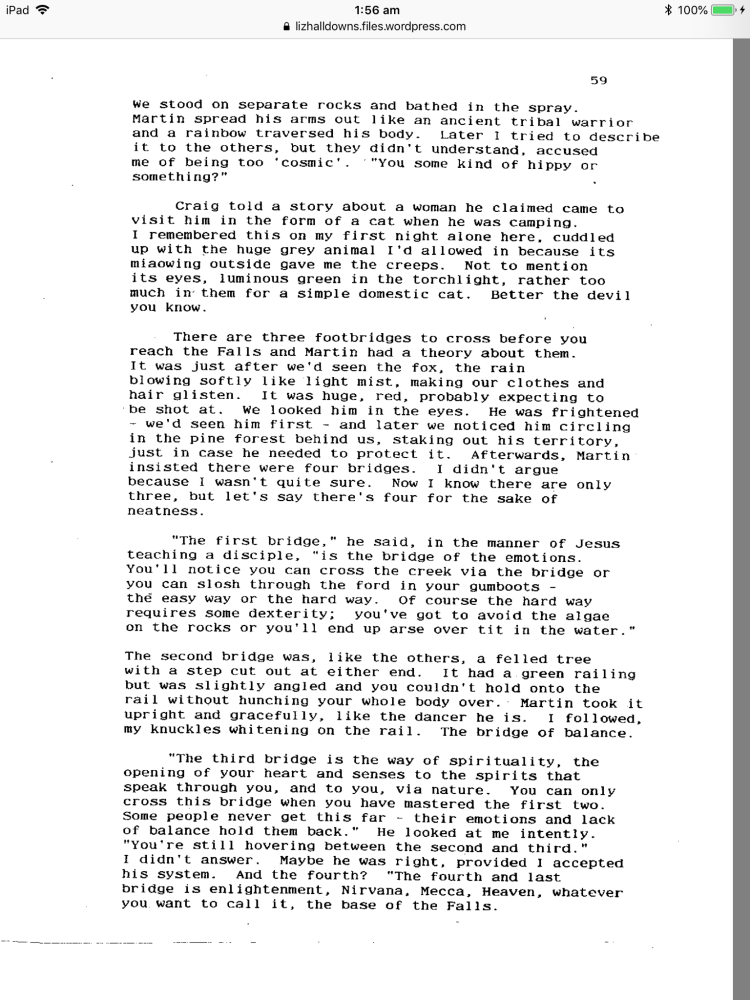 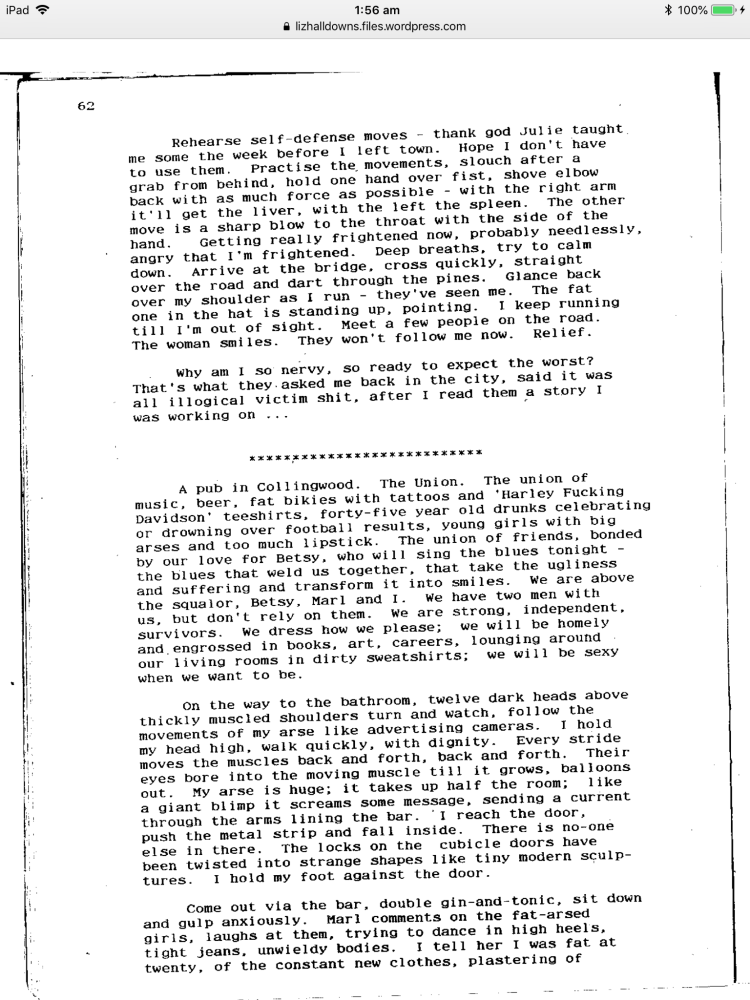 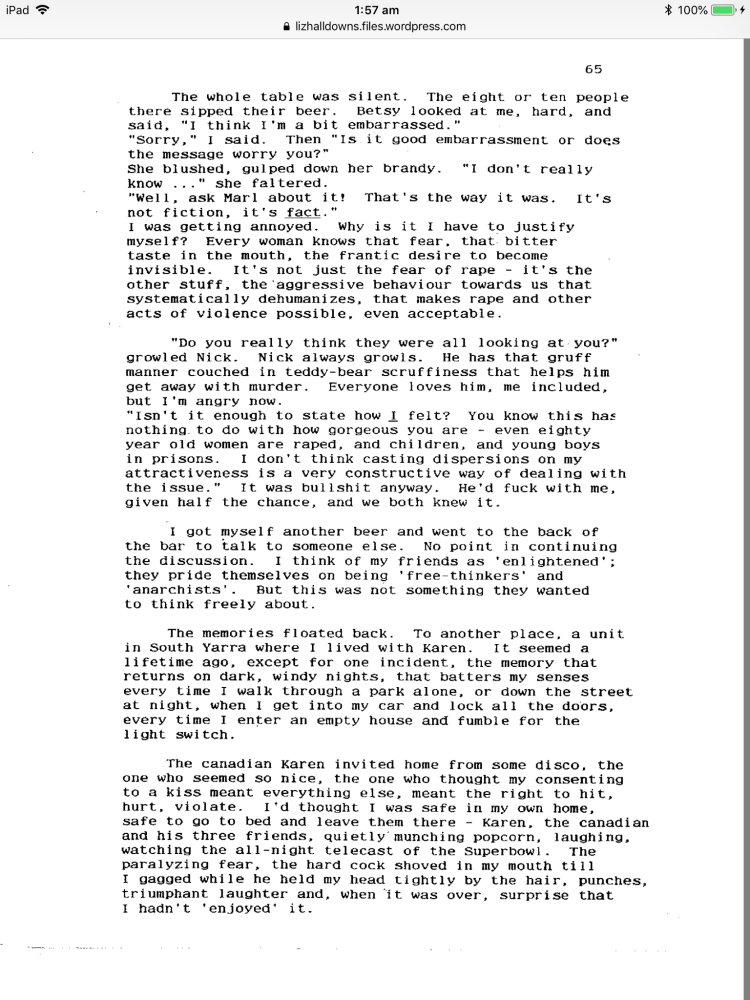