I recently had a 35 year old poem chosen for inclusion in an Australian anthology of writing about the #MeToo phenomenon. I was both excited, and bemused. I’d always suspected I might be a little ahead of my time in choosing as a young poet to deal with these less palatable topics – especially judging from the embarrassment some of this work seemed to engender in other poets, audiences, and editors. But these were issues that directly impacted on my young life, and I wasn’t going to live a lie.

All of my previous publications (6 collections of poetry published in the 1980s, 1990s, and 2000) are already available for download on this site.  But I thought, given the current state of play in the public discussion around gender, it might be an interesting exercise to collect together all the poems that dealt specifically with sexism, harassment, rape, domestic violence, and female disempowerment.

So here they are, my #MeToo poems.

‘letter to myself about you’ attempted to document the overwhelming sense of frustration when a partner tries to remake you into what he sees as an ‘acceptable’ version of ‘woman’.  When I read these words now, I realise that I actually felt quite murderous.

‘so you think you’re a poet girlie’ emerged from a challenge I set myself, to write down verbatim the things I was hearing as I attended poetry readings, seeking to build my profile. I figured if I put them all together, people would stop telling me I was exaggerating about the annoying behaviour of some male poets.  Sadly, it didn’t work. The entitled blokes just added ‘man hater’ to the litany of insults.

An early reflection on the objectification of women, and its often chilling results. Circa 1986, with reference to a 1962 Pix magazine.

‘safe’ originally appeared in Lauren Williams’ ‘Big Bang’ magazine around 1984. I republished it in ‘Conscious Razing’ in 1986. It was literally written on a Fitzroy pub toilet while I wedged my boot against the door to stop them getting in. This was what attending pub poetry readings was sometimes like for young women in that era.

The poem will appear in the upcoming Picador anthology ‘#MeToo: Stories from the Australian Movement’ in 2019. The artwork on this version is by Michael Wedd.

This next one appeared in my very first (self published) collection. Done via good old-fashioned offset printing, there were 400 copies of ‘Under Her Eyes’ produced and sold at poetry readings in 1984. It was on double-sided A4 paper, from memory about 24 pages of it, with a peach-coloured cardboard cover, artwork by Mick Wedd, and a stapled and gaffer-taped spine. 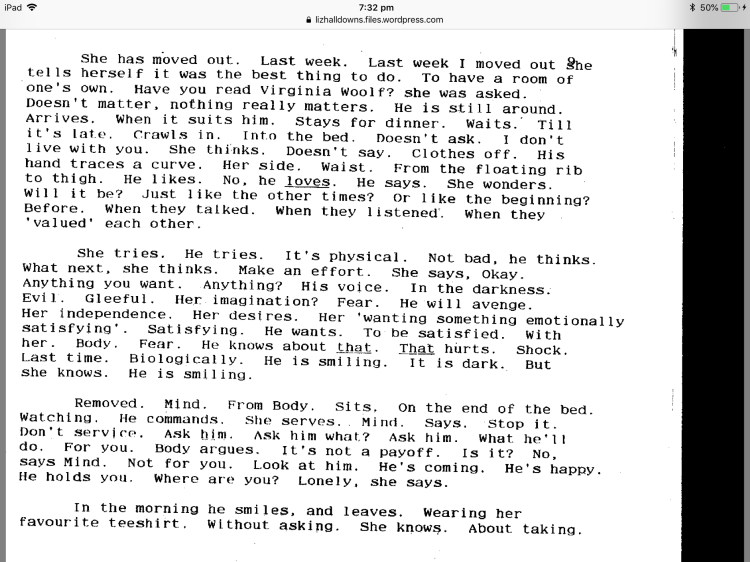 The following poem reflecting on 1987 statistics on Australian women”s experience of rape was published in ‘Luna Lynx: an anthology of women’s writing’, edited by Stephanie Mackay, 1987. 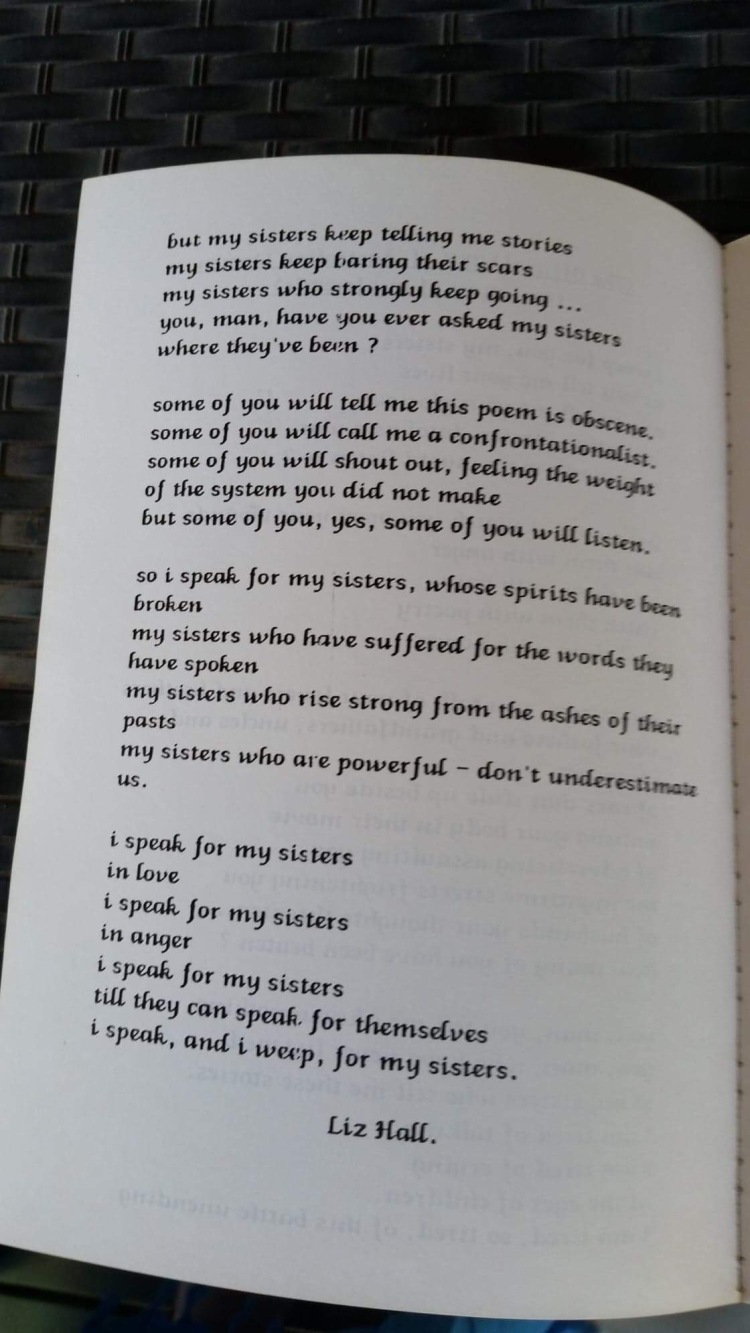 ‘sleaze’, about predatory poetry men, and ‘poverty’ (which for women also means a lack of safety) appeared in the autobiographical illness narrative, ‘My Arthritic Heart’ (Post Pressed, Brisbane 2006)

‘she ran I & II’ from ‘My Arthritic Heart’, 2006.  I wanted to discuss how oppressive social mores and sexist discrimination against girls in families force ambitious girls to leave the safety of home in order to find the self and have a chance of living the lives they desire.  In my case, these conditions also brought about a complete immune system breakdown at age 20, making this flight even more daunting. 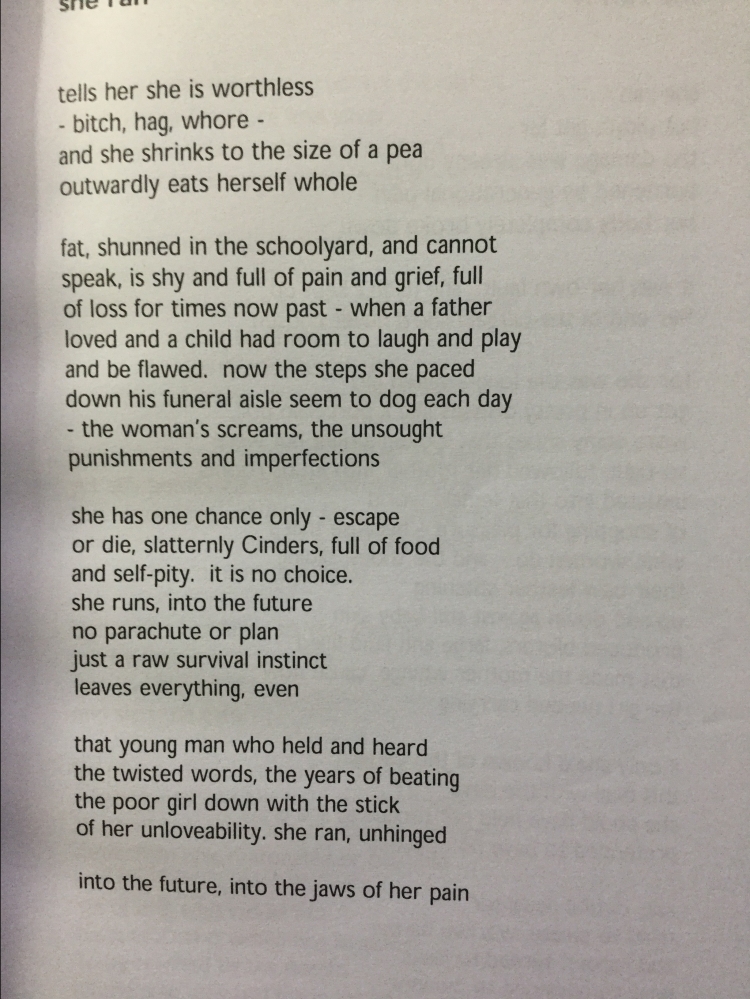 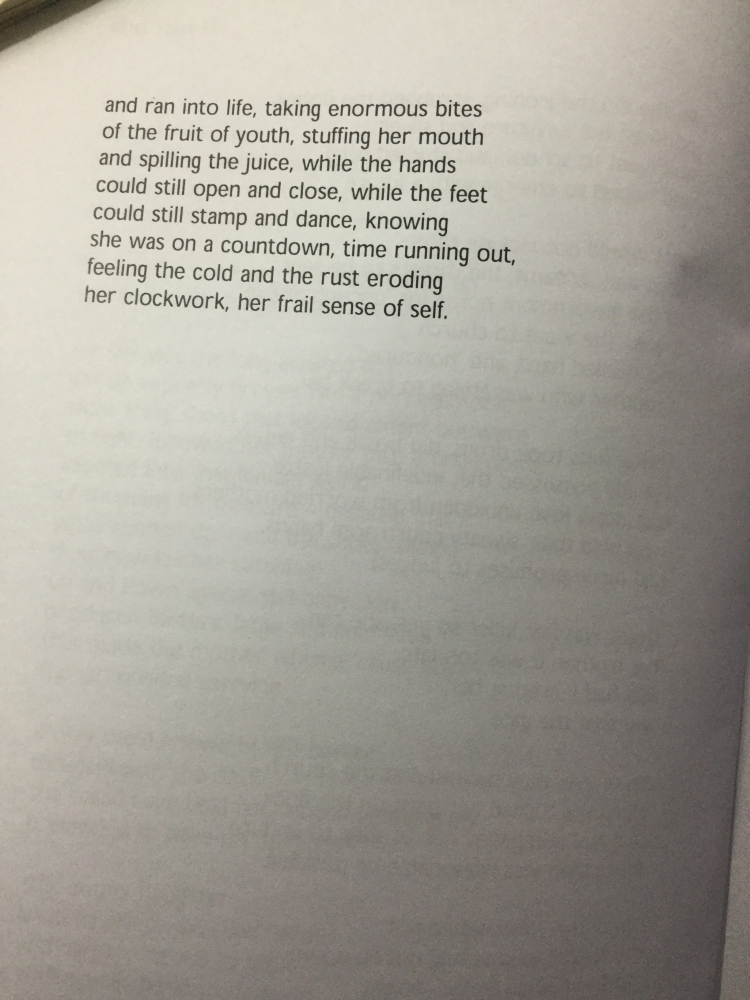 ‘swamped’ is about realising you are trapped and drowning in the ‘love’ of an angry and frightening relationship. This piece was published in ‘Writers Of the Storm: Five East Coast Poets’ (Tyagarah Consultants, 1993)

This one appeared in the collaboration on gender with Kim Downs, ‘Fit of Passion’ (1997).  Written after I moved from Melbourne to Northern New South Wales, this poem documents how other (even hippie) women tend to judge newcomers to their communities –  a result, I believe, of feeling unable to trust their partners. For the newly-arrived single woman, this can be a very lonely place indeed. 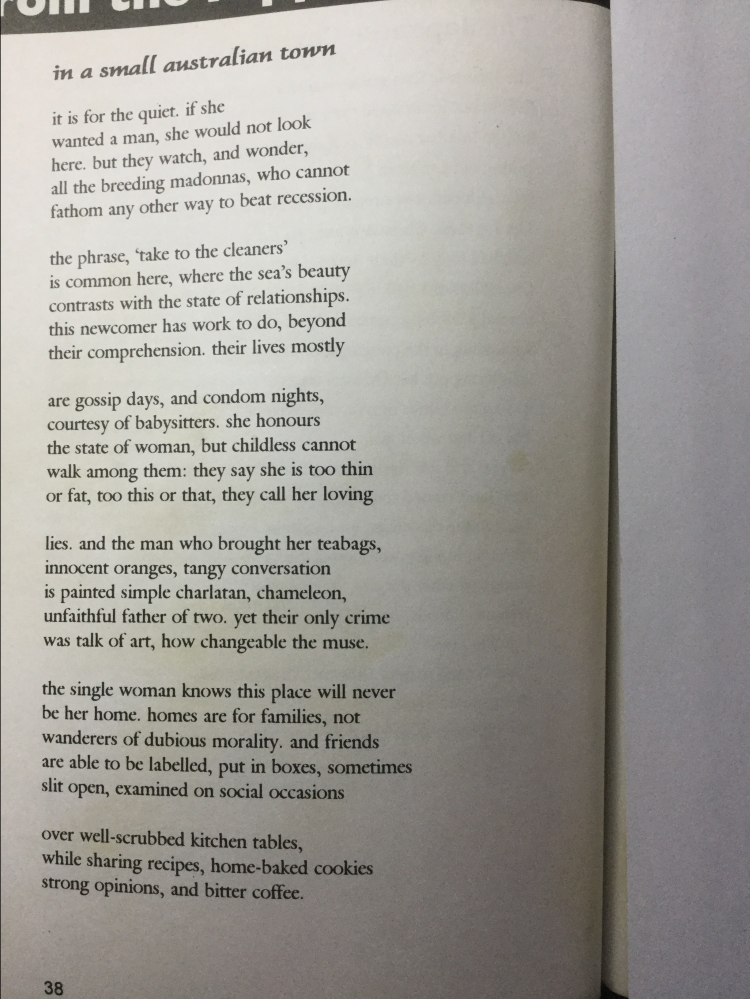 Also from ‘Fit of Passion’, this prose poem was an attempt to describe the loss of autonomy and sense of self the experience of rape causes in the rape victim.

First published in the 1984 self-published collection, ‘Under Her Eyes’, ‘The standard seduction technique’ also appeared in ‘Going Down Swinging’ and, later, in ‘Fit of Passion’.  The piece was included in actor Deirdre Rubenstein’s one-woman show, ‘What’s a Girl to Do?’ which was performed at The Malthouse in Melbourne in the mid 1990s.

‘mad as a …’ and ‘lessons my father taught me’ both appeared in ‘Fit of Passion. A video performance of both poems also exist on this site. 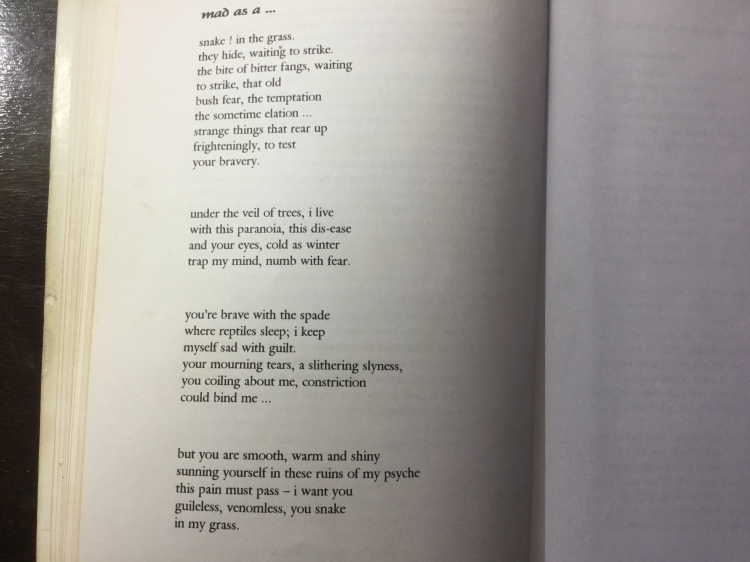 What my well-meaning Dad thought girls really needed to know, versus what we REALLY need from our men. 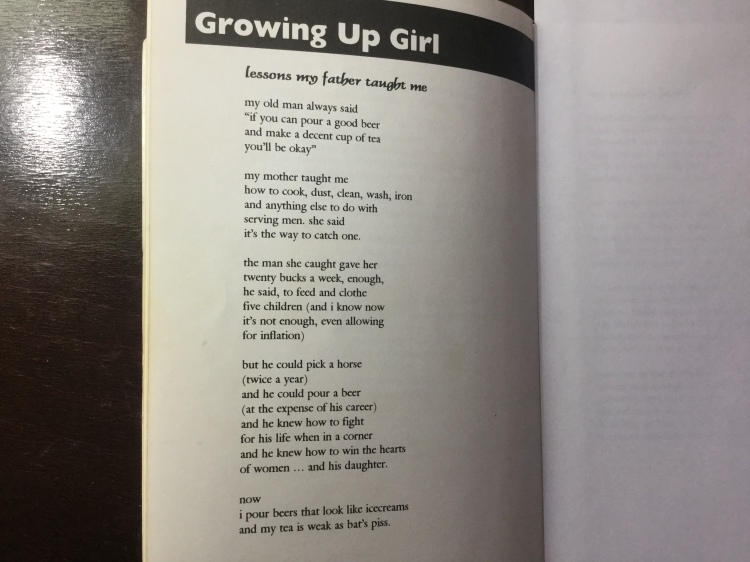 ‘Shaking …’ appeared in ‘Writers of the Storm’ (1993) and ‘Fit of Passion’ (1997).  Video and audio recordings (with soundtrack by SCART) exist on this site. It was written in response to Naomi Wolf’s seminal work, ‘The Beauty Myth’.

From ‘Writers of the Storm’ (1993), a prose poem about the body shaming society subjects young girls to as they develop. The denouement was an attempt to show that the mature female body can be a source of both pleasure and connection. 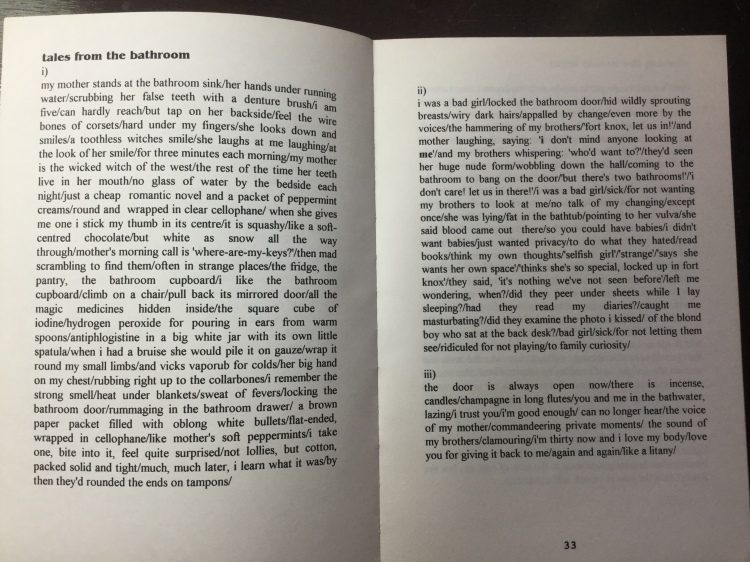 Possibly my most well-known piece, and with several video versions preserved on this site, ‘Bitch Poem’ dealt with the notion that women will always be thus labelled, no matter what they do. For some reason, men generally responded positively to this piece, which made me feel perhaps they could hear themselves in it.

A description of a toxic relationship with an angry alcoholic; the feeling of ‘walking on eggshells’, desperate for escape, and freedom. From ‘Girl With Green Hair’, Papyrus Press, 2000 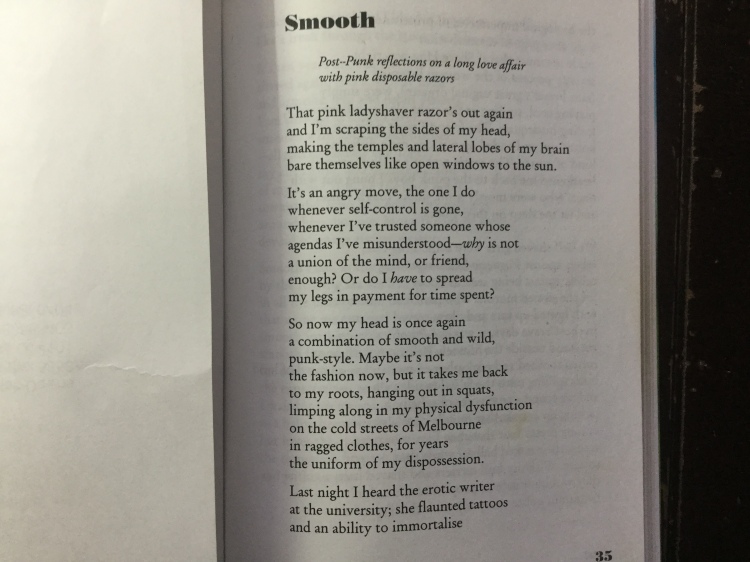 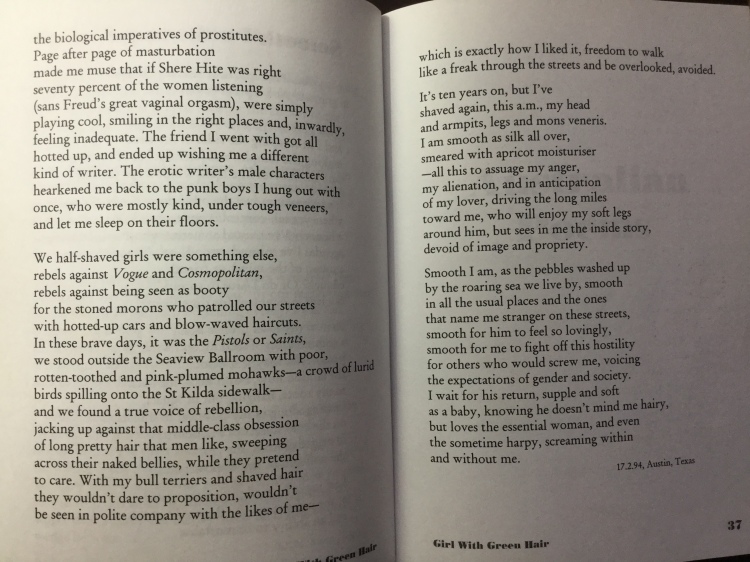