A headline from the New York Post (reprinted in Australia by news.com.au), January 5, 2017:
‘Disabled woman refused help by airline staff for not looking sick.

A WOMAN with a chronic illness was reduced to tears after being refused help by airline staff because she “doesn’t look ill enough” to be disabled.’
‘Nathalie Allport-Grantham, 23, booked special assistance on her flight to Nice out of Stansted Airport with Ryanair on New Year’s Eve because of her two chronic illnesses, the New York Post reports.
But when she showed up at the gate looking for help, she was told she wouldn’t get any assistance during boarding and she was “wasting [the airport’s] time.”
“She basically looked at me and said, ‘I’m here to help disabled people, I’m not here to help you,” the scorned woman told the BBC.’
This form of discrimination is so familiar to me that I shared and commented about it on Facebook, as follows:
“I have lost count of the number of times ignorant people have accused me of being ‘lazy’, a ‘malingerer who just doesn’t want to work’, or committing ‘welfare fraud’ just because my disability is not readily visible. Not all disabled people use wheelchairs.
In actual fact, I cannot walk or stand for long, am in chronic pain, and take numerous medications on a daily basis to keep my autoimmune disease – which I have battled for 37 years – under control. I have permanent deformities in my hands and feet and have difficulty with many daily tasks most people take for granted. This lack of understanding from my community is deeply hurtful and isolating, and over the years I have lost numerous ‘friends’ because they assume they know more about my health than my doctors.
The current climate of poor bashing by the Australian government is not helping one little bit.
In my dreams, I hike, run on the beach, work, and travel. In real life, I can do none of these things, beyond a bit of home-based freelancing.
So PLEASE think before you judge, and think even harder before you speak.
I often say to my partner, ‘If I was in a wheelchair or used a walker and X spoke to me like that, they’d be ashamed of themselves. But, no, hang on, no they wouldn’t. They’d patronise me with fake niceness so everyone could see how kind they are to the poor cripple.’

The way we treat the disabled is a national disgrace.”

The activist and ‘appearance advocate’, Carly Findlay (carlyfindlay.com.au),calls these almost daily occurrences in the lives of people with disability, ‘microaggressions’. To those not experiencing them, the uncaring remarks, ignorant judgements, or blatant stares at those who are different may seem like small potatoes. But when experienced frequently, these ‘microaggressions’ can feel like an unbearable burden, making lives that are already difficult even harder.

I spent many years ‘passing for normal’, because, unlike those with more visible differences, I can. I have always put emphasis on what I can do, rather than what I can’t. But, increasingly, I have become committed to proudly asserting my membership of the ‘Crip Army’, viewing my disabled identity as an essential part of my self, and embracing the disability community as ‘my people’. This is as it should be, as I have so frequently experienced discrimination, ableism, and infantilisation as I move through the world. I often feel people like me are afforded only one or the other of two possible identities – as a source of ‘inspiration porn’ when I achieve things in the world, or as an ‘object of pity’ when I cannot.

Below I have related just a handful of examples, from just one small area of my life, my involvement in the music world. Obviously, if one extrapolates these experiences over a lifetime and over the many roles a person plays in life, it becomes clear how ‘macro’ the ‘microaggressions’ can become in the mind of the target. You might call this ‘whingeing’ or ‘complaining’ (which some seem to think of as a capital offence), but I prefer to call it ‘educating the ignorant’, specifically on how NOT to treat people with disabilities. Or ANY people, for that matter. 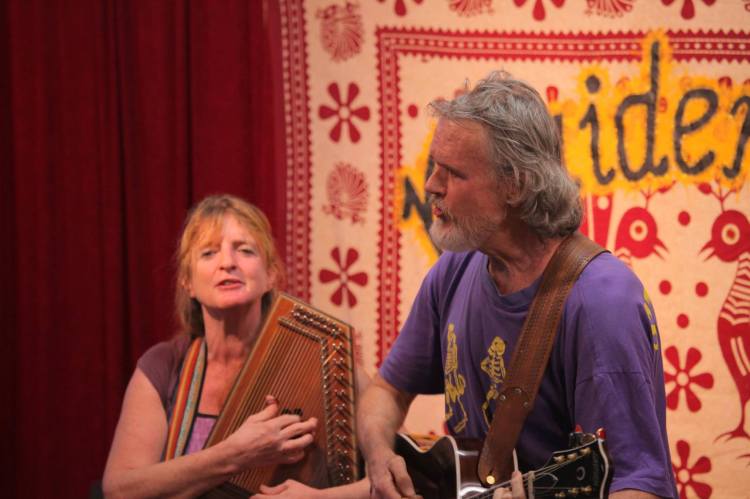 ONE
I play music and sing, and have done so professionally for the past decade. As a singer, it’s been freeing and a great source of joy to be able to accompany myself on the autoharp, strumming my own chords. People sometimes say to me, ‘That’s not a real instrument, all you do is press the buttons’. But when you have deformed hands like mine, to be able to play any instrument at all feels like a great achievement. (See also my Page, ‘In Defense of the Autoharp’ for more on this.)

Needless to say, this never went to Committee; instead she treated what I had told her as a simple personality clash. She phoned the Stage Manager and relayed back that he had apologised.
‘I didn’t want an apology,’ I answered. ‘I wanted to play. I am a financial member of this club and I wanted to play. And I wanted my feedback taken seriously and relayed to the Committee.’
Needless to say, we haven’t returned, or renewed our membership. It was all just too hard. And I am no longer in contact with ‘Toilet monitor’, she who doesn’t believe ‘feminism’ is necessary, and who doesn’t see anything wrong with a disabled person waiting four hours in blistering heat, in an attempt to positively contribute, being treated like this.

TWO
Some years ago, I sang and played bush bass in a trio, and we gigged for several years around southeast Queensland. Now, I am not above constructive criticism, but I am an experienced performer of over two decades in other, non-musical genres, (primarily performance poetry but also some singing), and I have been singing my whole life, including seven years in school choirs, culminating in an 18 part harmony madrigal group in my HSC year.

Our soloist, who had been informed about my physical limitations in some detail, had a friend, some twenty years my junior, who is an accomplished singer and performer in the musical theatre genre, but also suffers from a mental illness. She is a quite likeable, but highly erratic individual (for example, she is given to taking her top off in social situations so the boys can ogle her breasts, and consumes copious amounts of drugs and alcohol, including pharmaceutical grade ‘speed’ she gets from her doctor. I suspect our soloist, being partial to such drugs himself, hung out with her for this reason.)

For three long years, this young woman attended almost every rehearsal we had, and relentlessly criticised my singing, assessed my clothing, commented on the size of my breasts, and was generally disruptive. I put up with it because we had gigs to play, (booked always by myself or my partner), I needed the money, and I didn’t want to create drama. Besides, I had worked hard to learn the repertoire and I really wanted to get out there and play. She would often come to our gigs, and could be relied upon to be sitting in the front row, her back to the stage and talking loudly, whenever I had a lead vocal to deliver. It was infuriating, but I was determined not to stoop to her level by reacting.

On top of all this, according to our soloist, I was not ‘really a musician’, and I generally felt ignored and quite alone onstage. In the beginning he flirted outrageously with me and, when it became clear I wasn’t interested, then tried to buddy up with my partner, creating a ‘boy’s club’ atmosphere. It was very stressful, and hurtful, and I was stunned by the blatant cruelty. Eventually my partner and I decided to start booking gigs as a duo. This was the reason I started playing autoharp, so I could take over the rhythm guitar parts and my partner could play lead guitar. I had already worked too hard at this to just walk away. Learning to play 4 sets of material (around 40-50 songs) on a new instrument was a steep learning curve. But, as it turned out, we did quite well as a duo, and released a crowdfunded CD in 2014. 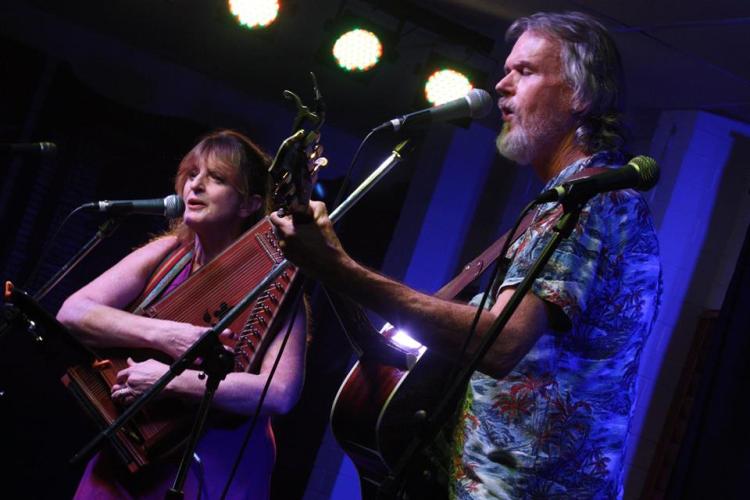 THREE
There is a small annual folk festival in our region, and I’ve lost count of the number of musicians I respect that have frequently urged us to apply to perform there, insisting we are (a) good enough and (b) as locals, should be part of it. Further, the organisers of the Sunday Gospel Sessions twice asked us to come and participate as we have repertoire they would have liked to include in the session. As much as we would like, we had been unable to attend this festival as audience and form personal relationships with organisers in the hope of a future booking because, relying, as we do, on our Disability and Carer’s Pensions, we simply cannot afford to drop $300 plus (for fuel, entry and food and drinks) in one weekend. There is an opportunity to volunteer but, given my standing and walking difficulties, this is not really an option.

I have applied for a gig for us at this festival, which purports to present ‘local’ acts as well as visitors, for the past four years. Even with substantial local exposure, biographical writeups of both of us in the local music press, and a new CD that received decent radio airplay via AMRAP and AIRIT and two favourable reviews, we were knocked back every time. This festival, like so many others, claims to be ‘inclusive’. But from the standpoint or disabled an/or low income musicians, this is clearly not the case. I will not bother applying again. There’s only so much rejection one can take.

There is nothing ‘inclusive’ about this event, and having a few highly-visible wheelchair users in the audience front row as a feel-good exercise for organisers is not enough to mitigate these obvious barriers to participation.

There are many more lived examples of structural and organisational disadvantage I could cite in my musical journey, but I’m sure by now the reader gets my point.

In 2017 we decided to cease playing professionally. The toll on my hands of staying stage-ready, while being continually rejected, has become too much, and I want to use my limited hand stamina to do other things with my time, such as writing and gardening. We have ceased to pay our yearly performer’s insurance, stopped sending out PR packages, and will now only play at small folk gatherings, parties, through personal invitation, and at walkup gigs where we feel welcomed. We have proved our professionalism again and again. And now we are done.

THIS is what discrimination against the disabled looks like.

I will no longer bang on firmly closed doors begging for entry.
If I cannot be welcomed with respect, and as part of my own musical community, then I will not bother at all.
It is all just too depressing and demoralising.
So, if you want to hear me sing and play, you’ll have to come to my house.
(Oh, and bring some Gin and Tonic!)

2 thoughts on “Living with an Invisible Disability 101: Microaggressions”