In the same way as so much of my work in the 1980s was ignored and derided and is now considered ‘cutting edge’ over 30 years later, so I see the same thing with so many activist friends.  I thought this incredible post from my dear friend, poet and musician, Elizabeth ‘Lish’ Skec was worth sharing around (with her permission, of course).  Thank you for your service to our community and planet, Lishie!

“The early 1990’s I participated in forest blockades, roadblocks and protests. Disrupted duck shooters and blockaded various ships in a dingy at the docks. I hosted a fake auction selling off the sacred sites of Melbourne with a megaphone outside the state library. Just to name a few.
I was arrested in every state in Australia for various civil crimes and actions.
Everyone but my workmates (some of them too actually) fellow activist and family treated me like I had some sort of contagious disease.
I was a crazy hippy. (Dirty too because as everyone knows those hippies don’t wash.)
‘She will sort herself out one day’ my family would say. Dad told me all about a new African food place and said ‘I’ll take you there one day. When you become normal again.’

Men would use pick up lines in pubs like
‘You’re a hippy chick. You into free loving and all that?’
People proudly displayed bumper stickers on their cars saying
‘Do something for the environment. Fertilise a greenie!’
Strangers yelled
‘Feral pig, feral bitch, dirty dole bludger!
Get a job!’ I had three. One of them in the health industry.
‘Do the vegetables scream when you pull them out of the ground?’
My smart mouth always said yes and gave them scientific evidence. It never helped.
‘You’re just a trouble maker, go hug a tree or something. Find a legitimate cause to complain about.’

My friends horse was shot by loggers,
we were run off the road in our car, a truck driver put a dead wombat full of cement in our letter box at the base camp for the blockades in a East Gippsland. The loggers wives drove over to our base camp in their cars and blockaded us. All sorts of crazy happened.
The police thought we were all on drugs, had mental problems or in my case had simply fallen in with ‘the wrong crowd.’
That was the theme in a police interview after my arrest at the Eden wood chip mill.
I had fallen in with ‘the wrong crowd.’ I didn’t look like the type to believe all that hippy end of the world environment nonsense and I had a real job.

Now in 2019 those crazy things that me and my fellow hippies talked about are happening, species dying off, the planet heating up, crazy weather and natural disasters on a global scale. To name a few. Part of me wishes that I had fallen in with ‘the wrong crowd.’That I was simply ‘a trouble maker’ or ‘on drugs.’

But I see a great uprising, young people around the world who have also fallen in with ‘the wrong crowd’ which is the RIGHT crowd and has always been the right crowd.
That actually never was a crowd, a phase, or crazy hippy theory to begin with.
The planet is in crisis. I may not be up to blockading and causing that type of ruckus anymore (I write letters and emails to politicians a lot, they are likely sick of me) but I can support those that are. The courageous young students who are speaking up and taking action. May they keep striking, stay angry and fight for this planet and their futures!
I truly hope that these actions force the powers that be to wake up, take responsibility and do what is necessary to take us back from the brink.

I know this was a long status but I needed to say it. I could say more.” 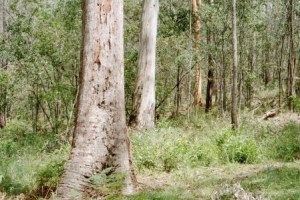 Worth fighting for.  Photo of Stringybark and Blue gums, ‘Euphoria’, Greenbank, 2000s by Liz Hall-Downs.

4 thoughts on “Some of us were ahead of our time …”